Although two pairs of jeans may be sharing the same size, they can still be very different from Each other. All because every pair of jeans possesses a unique fit, where the difference stems from the design details. Such as the distance between the crotch and the waistband.

In this article, the design detail in question is the crotch measurement. As the wrong one could leave you with an uncomfortable fit. Which brings us back to: how should men’s jeans fit in the crotch?

The best way to achieve ultimate comfort is to get jeans that fall smoothly inline with your crotch. In such a way there is no extra material that can be easily pulled. And the rise (such as low, mid, or high of the jean) should meet your preference. So you don’t end up with a jean that fits your waist but doesn’t offer any comfort for your crotch region.

How to Try On a Pair of Jeans the Right Way

There are many ways to put on a pair of jeans, but only one or two can ensure you don’t accelerate gradual wear and tear. Especially if you’re in the store and you haven’t bought your preferred pair yet.

Whenever you make a purchase through links on this page we make a small commission from our affiliate partners. Learn more

So here’s a safer process for trying on jeans:

The basic way to test out a pair of jeans is to put them on while standing. In this position, you get to determine if the fit of the jeans is comfortable enough for your crotch, waist, thighs, and ankles in a standing position. If it fails to fit at this point, then the pair is not for you, as further measures for trying out a pair would give the same result – tight & uncomfortable.

Although your trial pair may checkout in the standing position, it still needs to be stress tested. So the next step is to try your jeans while you’re in a sitting position.

As you’re in a sitting position, you need to lean forward while your elbows touch your knees. And this should be done for ten seconds or more. If the pair is uncomfortable then it means you’re feeling a significant level of stress on your belly button.

So the best indication that the pair fits perfectly is if you don’t feel such stress while you’re in a sitting position.

If the sitting position checks out for your pair, then you’re clear to perform another stress test. But instead of sitting, you have to squat.

So once you’re in the squatting position, there’s a possibility that you may begin to feel wedging and excess stress on your knees. A Pair that gives you such an experience shouldn’t be considered.

Note: The best pair should be comfortable enough while you’re in all three positions. Such as sitting, standing, and squatting.

If the jeans fit, then the zipper should be able to glide up and down easily without any stress. This is a good indication that you’ve found the perfect pair for your crotch.

Is It Worth Repairing My Jeans If It’s Torn At The Crotch?

Rip in the crotch or thigh region of used jeans is quite a common and inevitable problem. This is because the crotch of jeans is the most vulnerable part. As it undergoes non-stop abrasions almost every day, due to the constant change in positions such as sitting, standing, and even squatting.

At this point, you might be thinking your pair of jeans is no longer useful once it reaches the ripping stage, but it doesn’t have to be. As you can still repair your favorite pair by patching or using the invisible seam sewing.

Or better yet, you can prepare for the ripping stage by adding another layer of denim to the crotch or thigh region. This way you won’t be caught off guard, especially when a party is up and you need your best pair of denim.

How to Prevent My Jeans Crotch from Tearing?

As said earlier in this post, rips in the crotch region are inevitable. And a major reason is due to the aggressive conditions such a region has to undergo. Which is constant stretching and weakening due to frictions induced by daily activities. So the best measure to take is to prevent it from occurring.

Here are ways to prevent rips:

Keep away from crotch-tight denim jeans

The easiest way to get rips around your crotch or thigh region is by purchasing a pair of tight jeans that aren’t your fit. You would have to put up with probably a thinner layer of denim which wear and tear in a very short time. As you would need to sit, squat, and run depending on the situation.

So, the best way to avoid jeans that rip easily is by choosing the perfect jeans that fit well in such a way your crotch is comfortable when in all positions (sitting, standing, & squatting).

No… it’s not a bad idea to cycle but try to do it without denim jeans on. As the friction produced by pedaling up and down is double what merely walking around, sitting, and squatting produces. So you can conclude that it accelerates the expiring date of your jeans.

Instead, why not get yourself some elastic sports shorts for all your cycling sessions.

Although fading is an annoying issue with denim it’s not the same as getting rips. Grime and dirt can find their way into your jean material and cause it to weaken. This can be avoided as long as you wash regularly. Don’t just skip your jeans while you search your room for dirty laundry.

If you suspect the possibility of rips, then should consider reinforcing it with more denim. So the material on your crotch region will be able to withstand daily friction and push the ripping stage further away.

Do Skinny Jeans Hurt At The Crotch?

It depends on who’s wearing them. After all, they’re skinny jeans, which means the fit is a lot tighter than the average pair of jeans. Such can only comfortably fit actual skinny men. Where their crotch dimensions are a lot less than the average body size.

It only hurts for non-skinny users that wear them just for style. As the tight denim jeans would hug the thighs and crotch in such a way one could be left with a suffocating feeling. It could even go as far as affecting your fertility and general health.

There’s a reason why a particular jean cut is best for you and others aren’t.

For instance, if you have a skinny physique then the best jean cut choice is the skinny cut. As it fits perfectly with your crotch and thighs. The same can’t be said about straight regular jeans, which could be extra baggy in such a way it becomes low riding jeans.

Another instance to consider is if the user has an average body size, then he can choose straight or relaxed jeans cut. And he should stay far away from the skinny cut which may offer style but it comes with a suffocating feeling.

So, with the scenarios described earlier, the jeans style you should avoid are the ones that can’t fit your thighs and crotch region comfortably.

How Jeans Should Properly Fit

The whole idea behind a well-fitted pair of jeans is convenience – as though It’s natural with your body. So the best way to know if the right pair fits you perfectly are as follows:

What’s the pinch test? —It involves the use of your forefinger tip and thumb to measure out the space between your skin and the fabric. It’s usually done on the thighs and the calves region of jeans.

Note: the tip should cover 0.5 – 1″ of your fingertips. If it’s smaller than the range then it’s too tight. If otherwise, then it’s too big.

Get yourself a pair now…

Now you know it’s not just about the waist. As you’ll need to consider the fit to find what’s comfortable for your crotch and thighs. We’ve prepared a process for trying on jeans, so you can get your perfect fit without falling into the trap of guessing. Only to have your new pair rip up wear faster than it should.

Also, we’ve answered enough crucial questions that should help you improve your strategy as you make your next denim jeans purchase.

While you’re at it, why not get some boots to go with your jeans look. The Right Shoes To Wear With Black Chinos What Casual Shoes To Wear With Chinos: Complete Guide 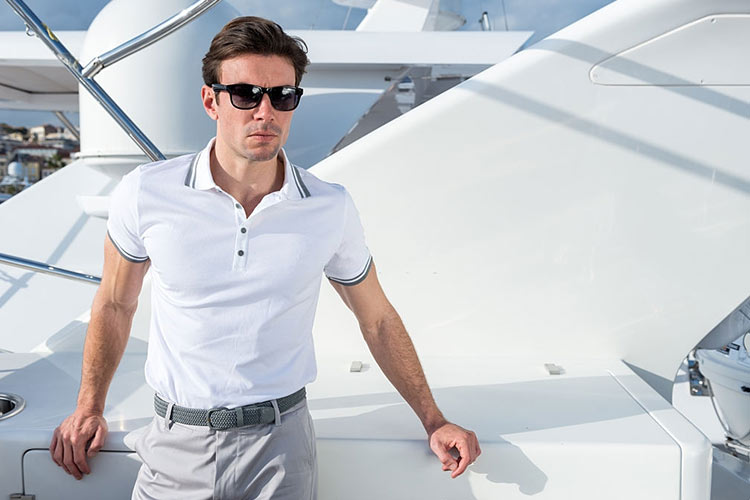 What shirts To Wear With Chino Pants For All Occasions

link to 5 Best Chelsea Boots To Wear With Chinos

If you're looking for stylish and comfortable footwear to pair with chinos, then Chelsea boots are great. These iconic ankle-length boots provide a sleek, casual look while offering extra support and...

Photo by Pixabay It is possible to wear virtually any shoe style with black chinos. You could opt for a pair of white canvas sneakers or slip-on loafers for a more casual look. These styles are...

Men’s Top Spot is a digital manifestation of answers to questions that men have relating to their sense of style, product options, Travel, and other outdoor experiences.

Whenever you make a purchase through links on this page we make a small commission from our affiliate partners.